My Town Needs A New Skatepark! 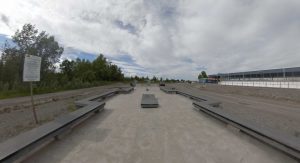 Here is the skatepark that the local skater referred to

I was at a small town skatepark recently, taking virtual tour photos. A  local skater, probably 14 or 15 years old came by for a session just as I finished taking photos. I gave him a sticker and told him what my photos were for. I also let him know about Skateparktour.ca because not everyone knows about it yet!

He commented that his town needs a new skatepark because the current one has no bowl. He’s right, the current park in his town is very limited. It has no elevated components to gain speed. It also lacks a variety of features such as stairs, up/down rails, hubbas, gaps banks, or transition features.

I responded that “it was time to start working on getting a new park”, and wished him a good session while I loaded gear in the car. It hit me as I drove away that what I said was not very helpful or motivational. I wished that I had made these 4 points with him:

Most skateparks exist because some people worked hard advocating for it, and persisted for years in some cases

Some skatepark efforts took years of advocacy, fundraising, and planning to get amazing skateparks built. Some examples include:

Lots Of Skateparks exist because of advocacy by young people – Go ahead, become an advocate in your town!

Here are three examples of skateparks built with youth getting the wheels rolling, there are many more

Find allies, others who want a new skatepark too, including:

You are not on your own, there are resources you can access!

Let’s see a new skatepark, or an addition, in this town and yours, soon!